An important part of the work of the NPOC Austria is the organisation of conferences on space law-related topics. Information on recent conferences can be found here.

The 25th edition of the  UN/Austria Symposium took place from 2 to 4 September 2019 in Graz under the title “Space: A tool for Accessibility, Diplomacy and Cooperation”. During the Symposium, presentations, panel discussions, workshops and demo sessions aimed at providing a view of how space can function as a tool for cooperation and diplomacy as well as of how the use of space data and technology can be enhanced. Due to the success of the multidisciplinary approach adopted during the two previous Symposia, in 2019 the focus was again not only on space science and technology but also on space law and policy. More information can be found on the website of the United Nations Office for Outer Space Affairs.

On 12 February 2019 the NPOC Space Law Austria organized together with the Secure World Foundation the event “Guidelines for the Long-term Sustainability of Outer Space Activities: Implementation Experiences and Challenges” on the margins of the 56th session of the Scientific and Technical Subcommittee of UNCOPUOS. During its mandate from 2011-2018, the Working Group on the Long-term Sustainability of Outer Space Activities reached agreement on the texts of a Preamble and 21 Guidelines. The panel event focused on the implementation plans, experiences and challenges of a number of States with different levels of technical and regulatory capabilities in the space domain. States and Permanent Observers were invited to share their thoughts and experiences regarding the implementation of the Guidelines at the event.

From 17 to 19 September 2018, the NPOC Space Law organized together with UNOOSA and the Graz University of Technology the UN/Austria Symposium “Space for the Sustainable Development Goals: Stronger partnerships and strengthened cooperation for 2030 and beyond”. In presentations, panel discussions and workshops, the importance of space technology, applications and activities for the achievement of the Sustainable Development Goals was examined. Due to the success of the multidisciplinary approach adopted during last year’s Symposium, in 2018 the focus of the Symposium was again not only on space technology but also on space law and policy.

Sagi Kfir, general counsel, vice president of policy and co-founder at Deep Space Industries, who is a member of the Working Group, presented the industry perspective. For the second phase of the Working Group’s activities a Technical Panel was created. It is composed of universities, space agencies and industry representatives. The Panel’s main objective is to discuss current and future technical questions related to the governance of space resource activities, such as which kind of technology is needed for different kinds of celestial bodies. The Panel will provide input to the Working Group allowing it to verify the validity of the Building Blocks under discussion. A very positive aspect of industry involvement is that many experts with specific technical knowledge in the field of resource mining can contribute to the work of the Technical Panel. An initial report of the Panel will be finalized in April.

The presentations were followed by a lively discussion with the audience, including UNCOPUOS members and observers, academia, experts, industry representatives and others.

From 3 to 7 September 2017, the NPOC Space Law Austria organized together with UNOOSA and the Technical University Graz the Symposium “Access to Space: Holistic Capacity Building for the 21st Century“ in preparation of the anniversary celebrations of UNISPACE+50.

More information on the Symposium can be found under:
http://www.unoosa.org/oosa/en/ourwork/psa/schedule/2017/un-austria-symposium-access-to-space_-holistic-capacity-building-for-the-21st-century.html

Every day approximately 100 tons of cosmic material reaches the Earth. Most of it in the form of dust or small rocks, which burn up as meteors in the atmosphere. Sometimes, however, larger objects, asteroids or comets, enter the Earth’s atmosphere, which can cause considerable damage. The asteroid that exploded over the Russian city of Chelyabinsk in February 2013 had a diameter of only 17–20 meters, yet it produced a blast wave that damaged more than 7000 buildings and injured over 1600 persons. The impact of a larger object could thus potentially cause a serious catastrophe on Earth.

Therefore, scientists are continuously searching for so called Near-Earth Objects (NEOs), asteroids and comets, which could come dangerously close to Earth and pose a risk of causing severe damage. Moreover, scientists are working on various concepts for deflecting these objects. During the event, three international experts discussed the technical, legal and economic aspects of planetary defence.

Dr Line Drube from the Institute of Planetary Research at the German Aerospace Center (DLR) gave an introduction to the NEO impact threat, deflection concepts, and the work done by the United Nations Space Mission Planning Advisory Group in this regard.

Prof Dr Frans von der Dunk, Professor of Space Law at the University of Nebraska-Lincoln, College of Law, presented an overview of the legal aspects of planetary defence. He discussed such major issues as a responsibility to protect, liability for damage caused by planetary defence activities, institutional issues involved in global responses to NEO threats, the use of kinetic force including, as a last resort, nuclear force, and the possible involvement of the private sector in discovery and deflection activities.

Dr Line Drube: How to prevent an asteroid from impacting Earth – Technical aspects of planetary defence

Prof Dr Frans von der Dunk: Avoiding the fate of the dinosaurs with the help of lawyers? – Legal aspects of planetary defence

On 11 June 2016, the ECSL National Point of Contact for Space Law Austria, together with the Beijing Institute of Technology – Institute of Space Law, and the George Washington University Space Policy Institute organised a symposium entitled “Looking to the Future: Changing International Relations and Legal Issues Facing Space Activities” at the Law Faculty of the University of Vienna.  Three panels of renowned international experts discussed trends and developments in international relations, space law and changing private sector pressures, and legal responses to space sustainability. The symposium was organised at the margins of the fifty-ninth session of the Committee on the Peaceful Uses of Outer Space which took place from 8 – 17 June 2016 in Vienna.

On 17 June 2015, the NPOC Space Law Austria together with the European Space Policy Institute (ESPI) organised an evening event on the topic “US and European Geospatial Data Policies”.

The collection of data by Earth observation satellites represents an increasingly important application of space technology, both in the US and in Europe. In the EU, the Copernicus program is being established to provide services in the fields of atmosphere-, marine- and land-monitoring, climate change, emergency management and security. In the US, the Land Remote-Sensing Satellite System (Landsat) is operational since 1972, but also other satellites are used for Earth Observation.

An important characteristics of the EU data policy is that it adheres to the concept of an ‘open data-policy’ and is also committed to the protection of several other rights and principles, such as the right for private life, the protection of personal data and of intellectual property. The US has already for a long time applied the principle of free access and free re-use of information. Yet, the protection of privacy, civil rights and liberties, and national security interests plays also an important role.

The event was moderated by David Kendall, incoming Chair of the UN Committee on the Peaceful Uses of Outer Space for 2016/17. The conference was organised with the financial support of Austrospace. 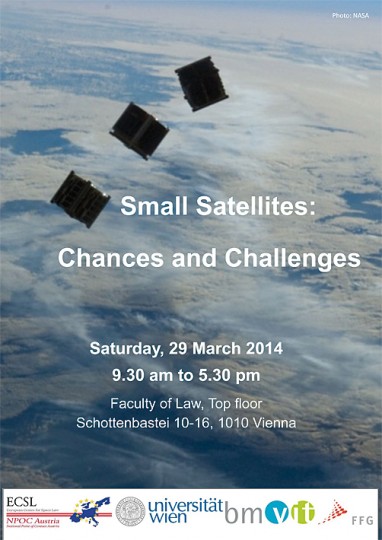 On 29 March 2014 the NPOC Space Law Austria organised a conference entitled “Small Satellites: Chances and Challenges” at the Faculty of Law of the University of Vienna. The conference was dedicated to the practical, legal and economic perspectives of the increasing use of small satellites.

Small satellites have become more and more popular in recent years. The development of technology has made it possible to build, launch and operate satellites at rather low costs. They are attractive for research and educational institutions, they provide opportunities for local and small business startups, and are a welcome way for developing or emerging countries of engaging in space activities. However, there is sometimes the misunderstanding that such low-cost satellite missions are not as relevant as large space programmes and as mere “Amateur” activities not subject to the same strict conditions and other criteria. Yet, international space law does not distinguish between “small” and “large” space objects or activities. The States’ responsibility and liability may equally become engaged. It is therefore necessary to be aware of the need to include small satellite missions appropriately in the scope of application of national and international regulatory frameworks to ensure the safe and responsible use of outer space. The conference focused on the specificities of small satellites missions from the practical, the legal, and the economic perspectives.